Artcore is running Create Your Future art workshops, training and support in an innovative project. Participants have the opportunity to learn mosaic making, pottery and fabric toys under the leadership of local artists. The project gives participants a hands on role to put on their very own craft fairs. Weaved through this programme are opportunities to improve employability and gain the skills needed to take their art hobby to the next level.

We still have spaces for new participants on this free programme so if you’re unemployed and would like to be involved, please call 01332 384561 or email admin@artcoreuk.com.

[Not a valid template]

One of our participants who attended Create your Future struggled with self-harm. She found that coming to our sessions helped her with her mental health and felt comfortable to chat openly with our artist Dawn. Dawn offered her support and encouragement which meant she came back week after week. At the Creative Dreaming session, she was very lively and told us all the things she’d done in remembrance of her daughter who died such as skydiving, paragliding and abseiling. It was good to see the change in her over that time and the confidence in her work and in herself.

Another participant said that she was so glad her boyfriend had encouraged her to come as she suffered from depression and was initially very apprehensive but when she got into the clay session it calmed her down and she began to relax and enjoy it.

One of our participants initially came in with her mum to sessions. She has autism and felt unsure about coming on her own. We supported her to think about how the cartoons she draws could be used. She started with one card and has gone on to make a batch to sell in the shop along with an embroidered puppet and mosaics. She now attends the sessions on her own and volunteers in the office on a Wednesday.

One participant was skilled in design and quickly moved on to become a volunteer with Artcore designing the Create your Future craft fair flyers. We gave her interview support and contacts of graphic design organisations and this gave her the confidence to then apply for two jobs in graphic design, which she is awaiting the outcome to.

We designed a bespoke Creative Dreaming session in order to help the Create your Future participants to dream big with their future plans. We reflected with them on where they had been two years ago, what brought them to create the future and the ways it had helped them. We then gave them an hour to make a collage about what they want to be doing in two years time. We reflected as a group and then split into smaller groups to look at practical ways that this could happen.

This session was particularly successful as members who are usually very shy or struggle in large social situations contributed their thoughts and feelings to the group. Also there were common themes that came up such as love of nature, cycling and art which prompted people to suggest to do activities outside of create your future such as a cycling group and a nature conservation group.

They identified that the programme had enabled them to socialise more, grow in confidence in their skills, experience new art forms and learn new techniques. The also said that there was an excitement when their made items had sold at craft fairs for the first time and were excited to keep making and selling in this way.

One of our participants had just moved from Swaziland to Derby in the summer. She was very keen to let us know how Create your Future had really helped her to increase her knowledge and skills. Being new to the country she had made new friends through the programme and been inspired her to use clay, jewellery, fabric upcycling in a new way to create items to sell. She said she felt so happy to make her first sale and enjoyed the craft fairs and having a stall at the Artcore Shop on Albert Street. 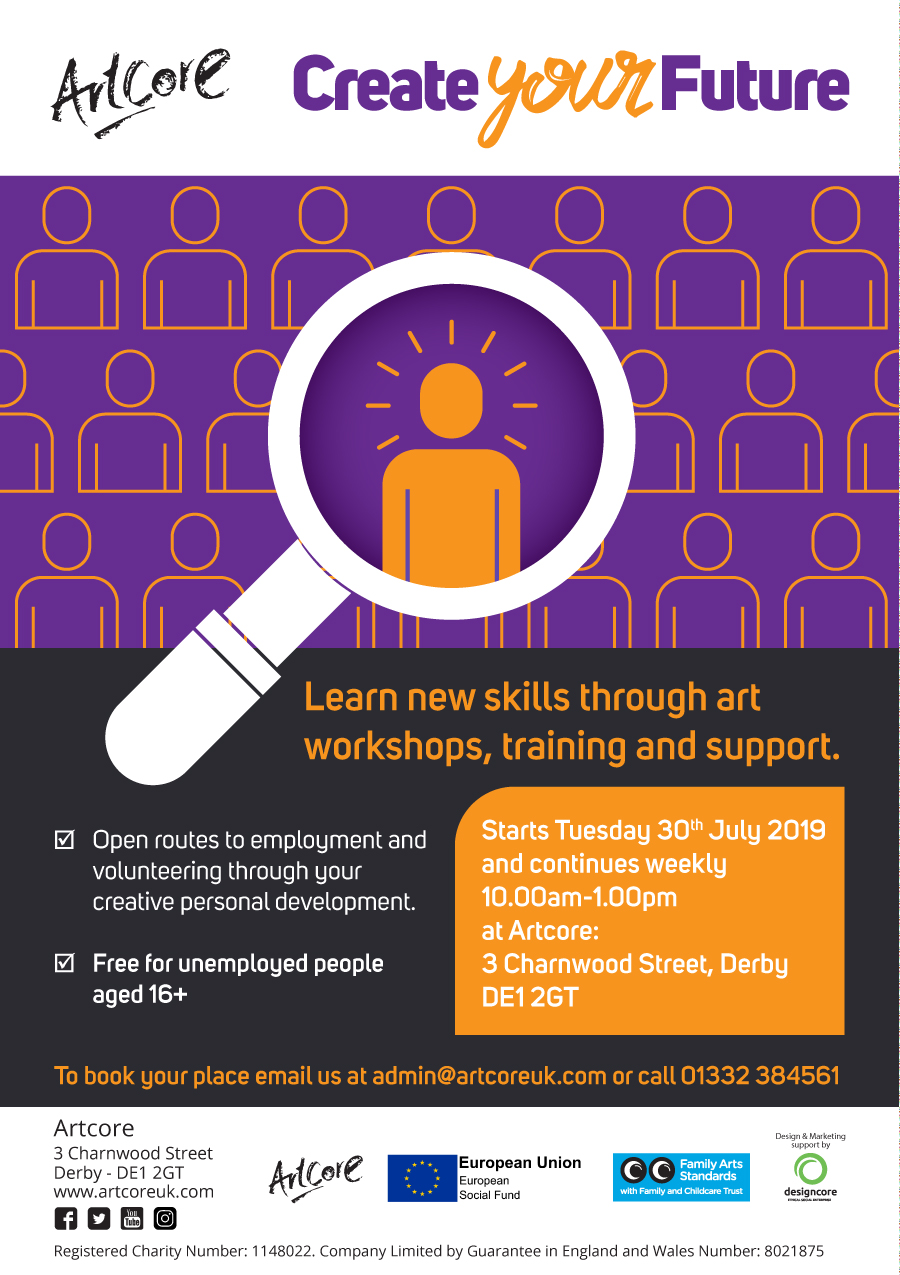